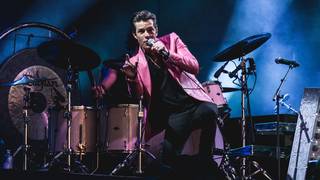 The Killers: Leaving Las Vegas is a documentary film about this extraordinary collective and by using interviews with the band and those close to them, rare performance footage, numerous obscure photographs [many of which come from private collections], location shoots and a host of other features, this program is uniquely enlightening, hugely informative, and downright entertaining and is certain to become the standard work on this magnificent band.